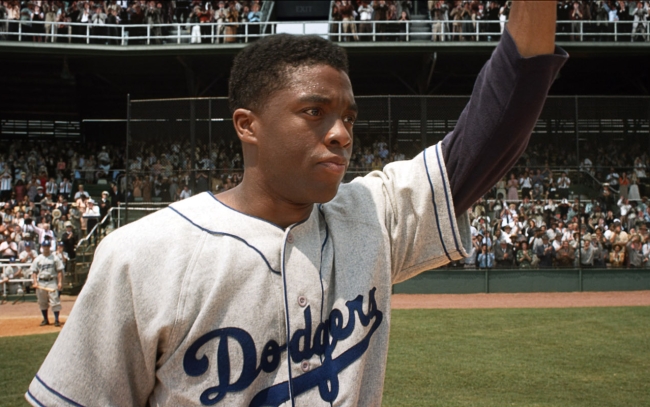 
Jackie Robinson is played to perfection by Chadwick Boseman. His physical stature, intensity, determination, mannerisms, and even his batting stance are pure #42. Like Jamie Foxx in Ray - Boseman becomes Jackie Robinson.

It was Rickey who signed Jackie Robinson to the Triple-A Montreal Royals in 1946. At the beginning of the 1947 season Robinson is promoted to the majors, ending sixty years of racial discrimination in baseball. However, a number of Dodger players signed a petition refusing to play with Robinson. Brooklyn manager Leo Durocher (Christopher Meloni) tells them to shape up or ship out. Those who did not agree with the decision were subsequently traded. Durocher's only concern was putting a winning team on the field. Yet, right before opening day Leo was suspended by Baseball Commissioner Happy Chandler for his extramarital love affair with actress Laraine Day.

In steps manager Burt Shotton (Max Gail) of TV's Barney Miller. Gail embodies Shotton's calming and laid back demeanor while leading his Dodgers to the National League pennant. His is another historically accurate performance. Like Connie Mack, he always wears a shirt and tie instead of his uniform.

Robinson is bombarded daily with racial insults from both opposing players and managers. With emotional support and encouragement from his wife Rachel (Nicole Beharie), Jackie rises above the indignity achieving 'Rookie of the Year' honors in 1947.

Brian Helgeland captures the visual and aural essence of 1940's Postwar America with his screenplay and direction. 42 doesn't hold back on exposing the ignorance. (The 'N' word is used  to emphasize many of the racial attitudes at the time). While revealing the archaic 'Jim Crow' laws of a segregated South.

Sports fans will especially love this film. It's inspirational and deeply charged, while capturing the spirit of Jackie Robinson. 42 is a great legacy and tribute to a 'real life,' yet reluctant American hero.