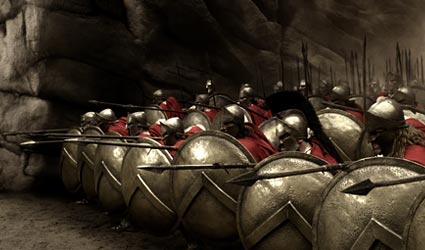 300 is ladened with Greek Mythology from 480 B.C.'s Battle of Themopylae when the eponymous number of Spartan warriors went up against Persia with its divine-like ruler Xerxes with no regard for his own. It feels more brawny, more fantastic than movies having more scope to them like Troy, though maybe stealthily getting around its own narrative hiccups.

Director Zack Snyder (the remake of Dawn of the Dead) dynamically projects the brutality and gallantry with his technical crew to make a three-dimensional world vivid from what Homer sang in "The Iliad." Those who were really into the Sin City experience with Miller "assisting" Robert Rodriquez might even delight more in this colorful adaptation.

Bombastic and grand, 300 is artistically striking from its hues in establishing Greece and its stark city-state Sparta from deep browns, gray, and beige. The informative voice-overs are provided by Dilios (David Wenham of the last two of the Lord of the Rings movies) who one might guess might have a particular, sole unfortunate distinction, considering the vastness against the politically-charged city-state.

The noble King Leonidas (Gerard Butler of The Phantom of the Opera, Dear Frankie) has lived for the chance to defeat the Persians. Spartans have been trained as warriors from birth with nary a feeling of ever raising the white flag.

Leonidas doesn't greet the foreboding Persian army messengers very well, but trying to appease the Spartan Council doesn't bode well for his plan which coincides with a religious celebration.

With 300 of his most brave-hearted "bodyguards", Leonidas positions to take on the enemy at the narrow Thermopylae pass. The multitude of Persians bearing swords and shields would be limited by space between the Aegean Sea's huge cliffs.

Thus, an exhilirating topographic look comes in a series of surges by the Persians. Besides wizards, warrior slaves, African animals, they have a formidable unit called the Immortals who don the type of helmet that made Darth Vader so dark and imposing. The choreography and athleticism, manifested in stop-action and slow-motion sequences is something as the Persians face annihilation.

Rodrigo Santoro (Love Actually) has a jolly old time as the wickedly adorned, enormous Xerxes out to erotically lure Leonidas before the 300 die "beautiful deaths." The manly, finest warriors for Leonidas in this thrilling, robust stylization of an ancient world are nearly bare with red cape, sandals, shields, and helmets against those bejeweled with costumes just right for an exotic ball.

The ensemble includes Dominic West (Hannibal Rising) and Lena Headey (Imagine Me and You) as the unscrupulous politician Theron and the gorgeous Queen Gorgo whom he'll have his way with. It is a welcome when the photogenic, if malnourished Headey is on view as her male counterparts often deliver more bluster than depth, as especially Butler doesn't let us into something other than homicidal vigor and virility. She also may be somewhat of a mitigating factor against Snyder and his writers who probably exaggerrated how out-manned the Spartans actually were.

A Spartan pariah named Ephialtes (Andrew Tiernan), desperate and deformed (think of a Greek Gollum), is the key figure in the denouement of 300 when divulging a clandestine way. The Captain embodies carnal displeasure as portrayed effectively by Vincent Regan.

An army of dark, ferocious decadence and cruelty, and some sensual passages make for a haunting, sometimes claustrophobic, even soulful vision that mostly male audiences will wish to "take a stroll" to, especially on IMAX and large-formatted screens.