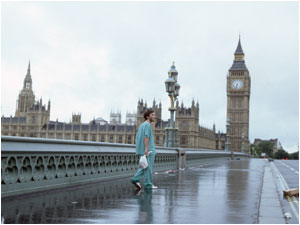 For many, 28 Days Later may sound like the title of the sequel to a Sandra Bullock movie (28 Days) about confronting alcohol abuse.  Danny Boyle's grim, yet thoughtful movie could probably use her to promote what is a post apocalyptic zombie fest that has many of its characters getting hungrier than expected.

A chance has been taken here in a summer sated with blockbuster sequels filled with comic-book heroes.  There are no stars as Boyle's tale of survival uses digital video and unknown actors, except Brendan Gleeson, whom stateside audiences will recognize from fare like Gone In Sixty Seconds.

Boyle's British-based film moves from London to Manchester and works shrewdly with writer Alex Garland to startlingly depict the effects of a virus.  A primate research lab is overrun by animal activists and what happens from a drop of blood or saliva calls to mind elements of The Omega Man.  But, this one is frightening given feelings about chemical warfare and S.A.R.S.

28 Days Later is much more intense and involving than any other recent horror flick aimed mainly at older teens and young adults.  It pulls us in from the perspective of Jim (Cilian Murphy), a bicycle messenger who comes out of a coma 28 days later after the virus has turned Britain into a vast wasteland with the infected raging in an outbreak of the living dead.  The impressive Murphy is first seen nude in an empty London hospital as he tries to make sense of it all.

An important person in Jim's confused existence is Selena, a mercurial Naomie Harris, a black woman who instructs him how to combat the cannibalism which can occur abruptly.

Boyle's intermittently frenetic tale of evil which forges a trail to a military camp has moments where actors like Gleeson and Christopher Eccleston's commander use their talents to add to the foreboding aura engulfing those who have optimism.  Megan Burns adds feeling as a shaken daughter and there are some memorable humanistic scenes during the journey.

The music and editing fits this peculiar, often nasty cautionary view that gradually becomes more introspective as a distant radio broadcast leads one through a harrowing, yet life-affirming end of days.