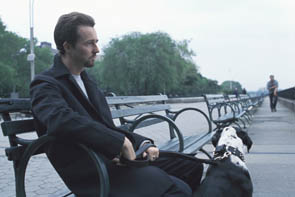 Director Spike Lee allows us to examine how Ed Norton's Monty Brogan got to the 25th hour through flashbacks in his last 24 hours as a free man.

As the evolution of Monty's drug dealing life unfolds through remembrance, we can't help but note he is named Montgomery for Montgomery Clift after his mother saw Clift in A Place In The Sun.  A Place In The Sun was developed from Theodore Dreiser's novel "An American Tragedy;" 25th Hour is an American tragedy.

Monty travels a precarious road like Clift to get to his place in the sun - the good life in NYC selling drugs for the Russian mob.  His contact is a powerful mobster who constantly corrects Monty when he is called a fat Russian, he prefers a fat Ukranian.

Two questions beg for answers throughout the last 24 hours; who betrayed Monty and how will he end up in the 25th hour when he must turn himself in to begin a seven year jail sentence.

Before the answers we learn he and his girl friend Naturelle (Rosario Dawson) are in love but we are not sure if the relationship can stand his downfall.  It may also have been Naturelle who disclosed the location of the drugs for the FBI raid.  His father (Brian Cox) is no longer close even though he owns an Irish pub funded by his son's drug dollars.

Monty's world is filled by two friends Jacob (Philip Seymour Hoffman) in a very effective sensitive performance as a careful teacher and Francis Slaughtery (Berry Pepper) a braggart who rates himself in the 99th percentile and Jacob in the 62nd when it comes to women.  The two men perceive the world from a separation of one hundred eighty degrees, as they discuss life looking down at 9/11 grown zero from Francis's apartment.

An emotional tapestry fills the script as Monty knows he screwed up and how he could have changed the outcome.  A change as small as investing his cash through Francis might have made a difference.  He sees his lateral reflection telling him to hate the diversity in NYC, immigrants to the wealthy on Wall Street when his heart loves the old city.

His father blames himself for not working harder at helping his son out of the rackets.  Hoffman's Jacob has such an inferiority complex he spends his time attempting to understand why he is alone.  Even an advance by a sexy seventeen year old student (Anna Paquin) ends badly.  Francis not only carries guilt but is asked to compound his pain in a climatic scene at central park as joggers pass by on an upper path.

Lee's work is again powerful but he leaves us up in the air about why Monty was betrayed and he doesn't allow the brighter future to prevail.  But he fills the last free 24 hours of Monty with passionate compelling powerful moments that we can't shake free from our minds.