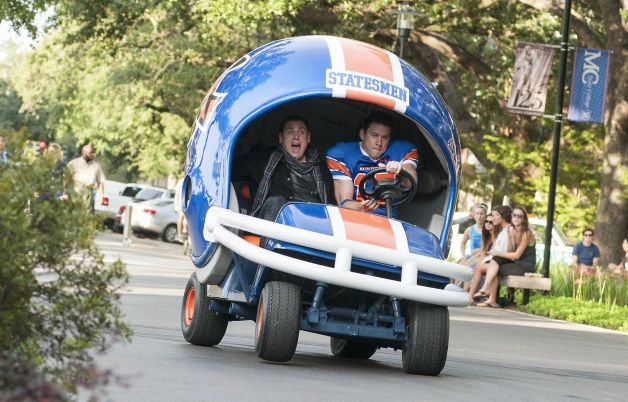 
As sequels go, this comedy is a winner!  This time around, instead of going back to high school, undercover cops, Schmidt (Jonah Hill) and Jenko (Channing Tatum) are assigned to a local college.  They have to track down drug dealers who are responsible for a student's death however, their bigger problem will be to blend in.

All they have to go on is a picture of the back of a guy with a unique tattoo, so they go from class to class looking for him.  There's a big deal made out of the fact that the guys look too old to be attending college, but the ironic thing is that most of the other students look like they're just shy of 30 themselves.

Schmidt, the more cerebral, gravitates to the arts and ends up performing poetry. Jenko, the athlete, becomes a star on the football field, they both find that they fit in, and question whether or not to continue as partners.

I had a good time at this Phil Lord/Christopher Miller comedy sequel.  I laughed a lot when the duo were hanging on for dear life on top of a speeding trailer driven by some drug dealers, I laughed when the two argued over silly things and I especially laughed when their Captain ( played by Ice Cube, who reprises his role) takes out his fury on a luncheon buffet.  He flings chicken and vegetables around a restaurant while cursing out Schmidt.

Writers Oren Uziel, Rodney Rothman and Michael Bacall incorporate a clever split screen with the cops experiencing drug trips very differently.  True to their personalities, Schmidt has a dark and dreary experience and Jenko's is happy-go-lucky.

What makes this film so enjoyable is the relationship between Hill and Tatum.  Although they are very different in their looks, reactions and personalities, they just seem to mesh.  They're partners and they're better at their job together, than apart.

Speaking of being together - there could be a bright future for this series.  During ending credits, the actors show us some possible scenarios for upcoming Jump Street sequels.  It's a riot, so don't miss it.