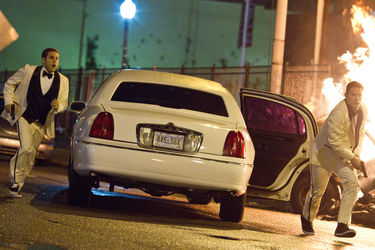 
A new action comedy goes the outrageous route from a premise similar to the unremarkable, if sweet-natured Drew Barrymore picture Never Been Kissed. Its pungency derives from a blithe, quixotic way through many dialogue passages as Miranda Rights are employed with vulgar verve early on.

Phil Lord and Christopher Miller transition with plenty of crude zaniness and (arguably) creativity from CGI animation (Cloudy With A Chance of Meatballs) to 21 Jump Street spoofing from the silly setup of a gritty small-screen venture when Fox (remember The Tracey Ullman Show and Married With Children) was just beginning to compete against the other big networks.

Long-coiffed Jenko (Channing Tatum of The Vow and Haywire) and, especially, Schmidt (Jonah Hill, recently nominated for Moneyball and of The Sitter) had their share of high-school  adversarial angst in a prologue episode set in 2005 with the latter sporting braces and obviously not finding his way to the prom.

Cut to the present where the two are cops and after failing to give the proper Miranda rights to some drifting druggies are put into the titular undercover program with a half-dozen or so others based out of church with Aroma in its name where Capt. Dickson, a scowling, no-nonsense Ice Cube better than he's been in a some time, presides.

The two disparate guys would seem to pass for high-schoolers, so they get new identities (as brothers - one explains of an adoption later) that they mess up when explain to the principal when they enter for the last part of the term. There mission is to infiltrate and get to the source of a new powerful synthetic drug (HFS - with its four stages) spreading like wildfire in the high-school scene. Jenko and Schmidt will obviously mess things up for themselves and give Dickson more of a headache along the way before finally making some headway at the obligatory prom.

Lord and Miller revel in getting the scenes right for a comically fit (and rather trim though jokes about his looks still abound) Hill and Tatum who shows some good timing with his costar (you know this was the kind of vulgar script that could loosen him up). So, there are plenty of wild set pieces with the heavier action in the beginning and the end that allows scribe Michael Bacall to air out all the insanity, stereotypes, and self-deprecating humor. One that will remind the target audience (in time when many collegiate's begin their spring flings) of films like Superbad (which raised awareness for Hill) and Step Brothers and abrupt darker turns of the forgotten Seth Rogen vehicle Observe and Report.

The notion of having a second chance in high-school (with the importance of the prom experience as highlighted in the more actioned-packed continued racy climax) is played out well enough during the overwhelming crassness with Hill having getting laughs during some track-and-field relay race, as well as his "Peter" for drama class and Tatum in and out of the chemistry lab learning the importance of the covalent bond (with its shared electrons) and phone-tapping. Rob Riggle (also of Step Brothers and a former Marine) enjoys the filthy, wisecracking insulting humor as the track coach and is oddly fixated in the film's major gross-out moment. James Franco's younger brother, Dave, though smaller shows exudes much screen presence as go-to-guy of the in crowd, Eric, who happens to stand up for environmentalism and against bullying.

On the distaff side is more of a straight role for the attractive Brie Larson (of the volitive drama Rampart) as Molly who becomes drawn to Schmidt and Ellie Kemper (of the fine Bridesmaids ensemble) as one of Jenko's insatiable teachers, Ms. Briggs. DeRay Davis has the pulse for what makes a heavy like Domingo operate, and it would be remiss not to mention the important source cameos from the likes of Holly Robinson Peete and you know who fondly remembered for his Tom Hanson part as well as partnered with Peter DeLuise.

This Jump Street is definitely tailored to accentuate a party atmosphere as it accommodates rude behavior throughout to get the job done (even at Schmidt's parents' house while the parents are partying themselves) as Lord and Miller create enough of a polished production with their crew (employing much rap on the soundtrack) not to make the experience too jarring (as Schmidt fits in with the popular kids and builds up some needed self-esteem). But, having Tatum and Hill (serving as a co-writer and executive producer the latter shared also by Tatum)  leading the way on how to pungently send-up the buddy/cop film (even expectations on when the massive explosions occur) and high-school film (not with the keen shrewdness of Easy A) will at least have its targeted demographic often in gut-wrenching laughter and awaiting Jenko and Schmidt's next assignment.