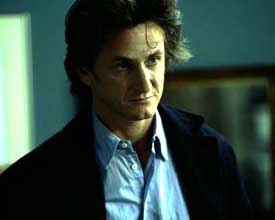 Those who saw Amores Perros know that Mexican film maker Alejandro Gonzalez Inarritu is quite a talent. His English-language film, 21 Grams, grapples comparably with life's unforeseen twist, compellingly taking the audience on a complex visual and narrative ride resulting a memorable meditation on life and death.

Inarritu works sharply with his co-writer Guillermo Arriga in a hyperbolic structure of sorts dealing with death and redemption in ways that operate with deep spirituality and reconciliation. The non-linear approach that feature highly involving performances by the leads, Sean Penn Mystic River, Benicio del Toro The Hunted, and Naomi Watts Le Divorce allows the viewer to speculate on the way people can astonishingly affect one another's fate.

We see an unforgettably sad event touching the lives of three families through the nimble editing of Stephen Mirrone and gritty, bleached-out lensing of Rodrigo Prieto using portable cameras.

Penn is Paul Rivers, a Math professor who is close to death with a failing heart. His formerly aloof wife, Mary, played by Charlotte Gainsbourg wants to have his child by artificial insemination. There's something amazing on their horizon, but it doesn't mean that things between them will be the same. Del Toro is the inebriated, imposing Jack Jordan who has spent much time in prison, but turns things around by becoming a born again Christian. Melissa Leo is the thick-skinned wife, Marianne, who doesn't seem to be in love with Jack anymore.

Inarritu handles the ramifications of personal turmoil with realism as we see the understanding of what life has in store for the flawed characters which tests their beliefs, hopes and hypocrisies.

This grainy, transfixing cinema unfolds with big aspirations in a daringly diagrammatic technique and Del Toro, Penn, and Watts are up to the task in a film that heightens the importance of its title which is "the weight that is lost when one dies." It's some kind of convoluted, rhythmic stream of consciousness.