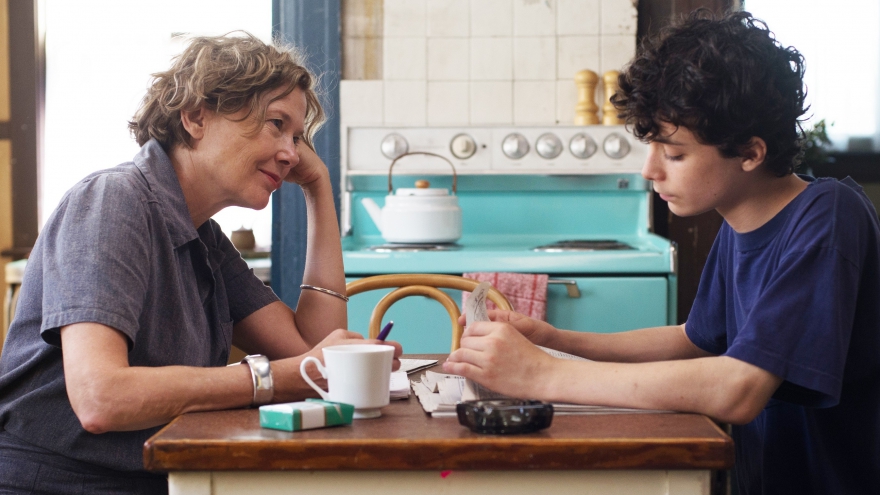 
1979 (pre-Reagan) Santa Barbara, California is the setting for this humorous and touching relational clashing and coming-of-age from the maker of Thumbsucker and Beginners. A maturity of nostalgia tangential to redemption helps make notions of self-awakening and counterculture resonate in heartwarming fashion.

Life prior to the 'World Wide Web' and digital media is well captured like The Nice Guys in the 1970s in all of its period trappings in this autonomous take on domesticity with the flow of the uninhibited, bohemian and dysfunctional. Especially when it comes to the psychedelic and the Polaroid moments edited often with a certain stylish flair.

The adolescent son Jamie, a surprising Zumann, is of concern as rebellion and cultural change are in the air. He needs a bit of organization in his life and that's where the title comes into play. Bening's spunky, dissolute Dorothea Fields is Jamie's dissolute, chain-smoking mother and landlord has difficulty getting through to him and wants him to be inspired with love and freedom in his ennui.

The angst in the mother/son orbit from the slender, if somewhat spry screenplay works off of upbringing aides to help mitigate adjudication in the form of Gerwig's purple-coiffed unencumbered, punkish news photographer Abbie lodging downstairs exposing some empowerment and longing for understanding. Also, nicely developed is Fanning's charismatic, illusory Julie who develops a pure bond with her more reticient neighbor. Crudup's William finally gets his due, and some decent auxiliary turns comes by way of Alia Shawkat's Trish, for example.

The filmmaking establishes narrative and characters with consistent stimulating acuity headlined by a pungent, concerned Bening (at least as solid as she was in The Kids Are All Right and maybe her best role since Being Julia) whose plain-speaking adds to the convincing, lived-in feel like when talking about the "great shortcut to depression." And her raw, authentic approach has an effect on Gerwig and Fanning that oddly elevates their naturalness and affection to their disparate characters.

20 Century Women is an evocative rendering of teenage life, motherhood in all of its sneakiness and quirks with some hardly racy sexual humor well inserted into the storyline. Like when Jamie makes an observation after a peer gets boastful. But, it's pretty good-natured entertainment of a family portrait with a personal imprint as well as Talking Heads prominently appearing on a soundtrack appealing mostly to Gen Xers prior to the onset of MTV.