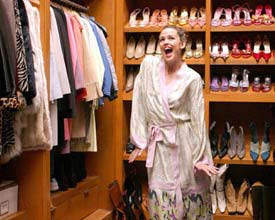 
Jennifer Garner (TV's Alias stars in this comedy about Jenna, a 13 year old who wakes up to discover that she has become a grown woman of 30.

It opens in the 1980s on Jenna's 13th birthday, she's having a birthday party and before her guests arrive she complains to her mother that she wants to be a woman that has a fabulous figure and who controls a fashion magazine, not the flat chested, gangly girl she sees in the mirror each day.

Her party is set in the basement and she gets out her best tunes and waits with her buddy Matty for the popular, snobby girls and the blond boy who she dreams about, to arrive.

Matty's a little chubby, somewhat nerdy and very loyal. He also has a crush on Jenna, but she's more interested in the boys who don't give her a second look.

When the kids arrive, they play a dirty trick on Jenna and she falls asleep beneath a doll house that Matty made for her. When she wakes the next morning, she's a beautiful woman (Garner) with an editor's job at Pose Magazine. Her unlikely friend and coworker is the very girl that used to laugh behind her back as a teen. But, she has lost contact with Matty.

With all her success and beauty, she still misses her childhood friend. So, she asks her assistant to track him down. Matty has lost weight and turned into the adorable Mark Ruffalo, and even though he's engaged to be married, Jenna is very interested in renewing their friendship.

Garner is perfect in this role. Obviously, her strenuous workouts for Alias have allowed her to do the many pratfalls she performs here. She makes faces, walks like a girl unsure of herself and dances up a storm to Michael Jackson's Thriller. She has a great time portraying a girl un-expectantly thrown into adulthood.

13 Going on 30 is much better than I expected, and that's in large part due to the great 80's music and the delightful Ms Garner.