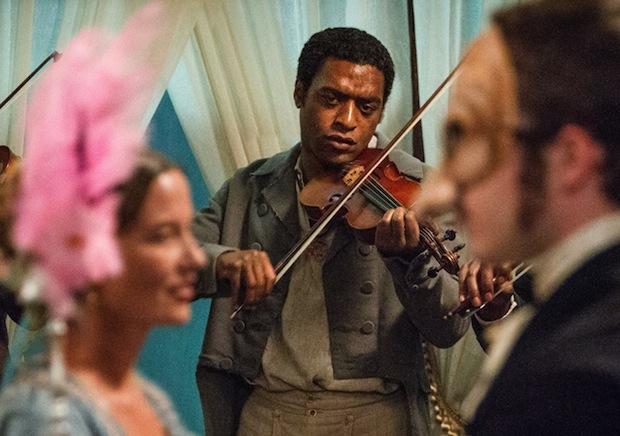 
A poignant tale of racism from Solomon Northup's 1853 published memoirs offers much grimness and nobility in an unflinching way when blacks had no legal rights and were mainly considered lower than humans. That's evident when a wicked slave barterer with the surname of Freeman (Paul Giamatti) wants potential merchandise to be examined.

In a deeply relevant and gripping 12 Years a Slave, black director Steve McQueen (known in part for his stunning, if crippling take on sex addiction, Shame and with Bobby Sands against the British in Northern Ireland in Hunger) provides a raw, grave portal for Northup (an amazing Chiwetel Ejiofor who's starred in quality films like Dirty Pretty Things, Children of Men and Inside Man born in London of African parents), a free Northern successful fiddle-playing Saratoga Springs, NY black American duped and imbibed by captors who beat and force him into southern servitude in 1841.

A desperate Northup wants to "live not survive" and has to stay silent and take on the slave name of Pratt Hamilton (same surname as Olivia de Havilland's Melanie in Gone With The Wind). McQueen's artistry in using John Ridley's sound, passionate screenplay allows for a less sensationalized variant on Mandingo(which Quentin Tarantino uses for his own ultra-violent, borderline exploitative, stylized purposes in another sweeping firebrand actioner Django Unchained) that has a remorseless intensity able to retain piety from abhorrence.

How the white masters imposed their will on Northup makes his "difficult time these last several years" may be a different kind of hell and degradation for viewers who will find solace in the emotionally accessibility of what creates considerable, even stifling tension. In a pre-Civil War time (before the events in Lincoln) a shackled, abducted Pratt has to lie about himself and say as little as possible but not after enduring much pain when claiming his freedom. Immersed in a life of squalor and white supremacy, required to pick 200 lbs of cotton daily or else get a flogging.

In the adept, keen way McQueen embraces the challenges of the material in part with variations on the Southern whites of the plantation aristocracy. A couple of them, played by Bryan Batt and Benedict Cumberbatch, actually let the condemned, estranged man spent time with his fiddle which harkens back to a more serene existence. Far less genteel, however, is Edwin Epps who "does what he wants with his property," an unforgiving overlord filled with barbarous inhumanity by Michael Fassbender of McQueen's earlier films as well as more mainstream fare like X-Men: First Class.

A couple of scenes really take on the historical reality in ways to share in suffering and an order for those who "will have to answer for not treating them as human." One includes a dangling Solomon trying to keep his balance while other slaves toil in the yard and is ignore by another elite passerby and a circling camera in the other has Solomon whipping a petulant, productive slave Patsey (an impressive Lupita Nyong'o) whom Epps has grown very fond of but has gotten very upset at. Around the exhausting unpaid labor and plantation gentry is possibly the more repellent, jealous matriarch wife of Epps (Sarah Paulson of Mud, small-screen program not for the faint of heart  American Horror Story: Coven) who takes out much loathing on Patsey and wishes her husband do the same.

12 Years a Slave includes other acclaimed, established thespians like Alfre Woodard as Southerner who has moved up in status by marrying into a white family and Brad Pitt as Bass an abolitionist (appearing later) who lets Epps know where the towering plantation owners stand when it comes to racial equality. From the efforts of all concerned to relate a greater understanding in an influential period of American history, an irrefutable Ejiofor provides enormous grace and dignity from the humiliation and subjugation of a profitable political institution. McQueen's remarkable, detailed way on a sizable canvas makes for pertinent, more canny and impactful than even  Lee Daniels' The Butler which warmly appropriated family melodrama to the Civil Rights Movement.